Deprecated function: The each() function is deprecated. This message will be suppressed on further calls in _menu_load_objects() (line 579 of /home/rd/html/project.c2learn.eu/includes/menu.inc). 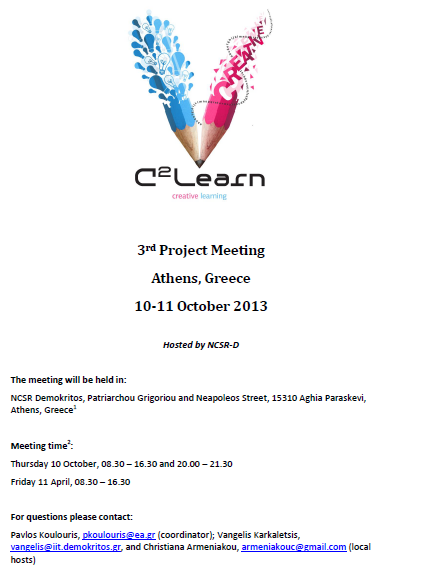 The objectives of the meeting were to review progress in months 6-12 of the project, to decide any corrective action required, and to plan for the next 6 months.

The meeting intensively examined achievements, challenges and opportunities, and made the corresponding decisions for the project, focusing in particular on project Deliverables and the preparation for the 1st project review.

For each strand of work, there was a relevant session, each structured in two parts: a first, shorter part, with a concise accurate description of work progress, status and plans, and a second, longer part devoted to consortium feedback and discussion.

The consortium in particular focused on Deliverables completed since the previous meeting (April 2013), as well as progress since the last delivery of Deliverables and work towards the next Deliverables, in each strand of the project. Especially Deliverables due in M12 were intensively discussed in terms of content, degree of completion, any critical issues/problems and ways to address them, as well as detailed and commonly agreed plans for quality review and completion by the relevant deadline.

In addition, five sessions were included in the programme to support further and stronger sharing of understandings and visions within the consortium, as well as sharing partners’ interests, priorities, and concerns. They ultimately resulted in shared decisions that will be actively implemented by the consortium in the next 6 months.